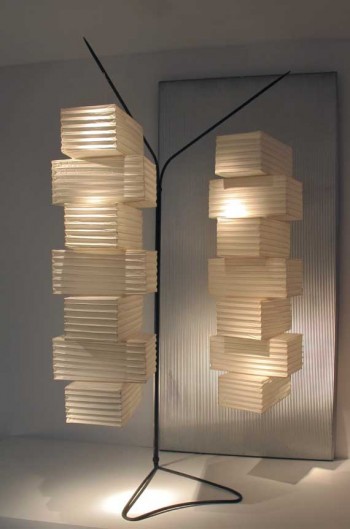 LAFFANOUR – Galerie Downtown / Paris showcases the lamp designed by Charlotte Perriand for her Rio flat in the 60’s.

In the beginning of the 1960’s, Charlotte Perriand escaped to Brazil, twenty years after exploring Japan.
There she met Oscar Niemeyer and mingled with Brazilian intellectuals : Jorge Amado, Burle Marx, the Novo cinema.

“In this splendid space in front of Ipanema bay, Charlotte couldn’t find inspiration. She decided to bring me to North of Brazil to “slog“. For 15 days, we discovered the baroque architecture and life among Amazonia Indians. (…) Holding up the two lanterns of her friend Noguchi, this lamp made with a twisted renforcing iron bar, in order to transform it into a balanced suspension, was sketched on a paper tablecloth of a table in a bistro in Bahia, after a night out in Cordomblia.

Japan and Brazil made a lasting impression on her, two opposite cultures that she knew how to mix harmoniously and which she was in resonnance with but never influenced by. » Pernette Perriand Barsac, prelude to catalogue Charlotte Perriand : Brésil, Galerie Downtown Editions.

Until 29 March 2014, LAFFANOUR – Galerie Downtown / Paris presents this amazing piece among a selection of Perriand’s creation from the 1930’s to 1960’s.