With the exhibit officially opening on May 10, 2018, there was so much hype about the “Heavenly Bodies: Fashion and the Catholic Imagination

” exhibit at The Met, that when I finally made it to the Museum a month later, I was worried that it will not live up to my expectations. 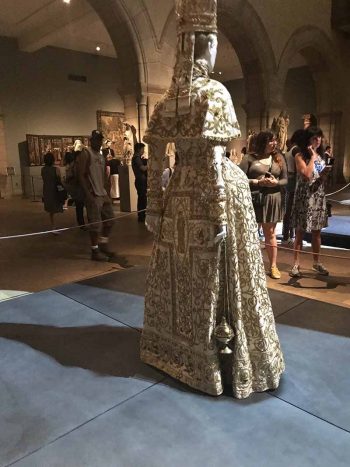 But, when I was greeted by mannequins wearing Dolce & Gabbana at the entrance, I knew I would not be disappointed. I was not even halfway through the exhibition when I saw the “Evening Ensemble” from the House of Dior by John Galliano Autumn/Winter 2000-2001 Haute Couture Collection.

It then continued to say “the lavish materials and ornate embroidery of this haute couture ensemble by John Galliano for Christian Dior evoke the baroque splendor of the liturgical vestments. Stylistically, it is based on the cope, a long cloak fastened at the chest with a clasp, and the mitre, a form of headdress reserved for bishops and the supreme pontiff. The embroidery required the combined efforts of the Maison Lesage and Broderies Vermont ateliers, which might explain the inscription at the back of the ensemble: “Dieu est mon Maitre” (God is my Master). Such an expression of the highly specialized skills of the haute couture is a reminder that fashion, not unlike the Roman Catholic Church, is defined by a system governed by hierarchy.”

As I admire the piece, my thoughts went to Pope Emeritus Benedict XVI when he became a religious fashion icon thanks to a Newsweek article (November 20, 2005) headlined, “The Pope Wears Prada” in reference to the red shoes the pontiff seems to be always wearing.

Unbeknown to many, the red shoes are a Catholic tradition that dates back centuries. It is red because it symbolizes the blood of Christ. All modern Popes have worn them. That the world just noticed them now can perhaps be attributed to the internet era we live in. Twenty-four hours news and every millisecond count because Google updates every second.

Then in 2007, in a surprising move, Esquire magazine named Pope Benedict XVI “Accessorizer of the Year,” again in honor of his red shoes. It’s as if the fashion world discovered Catholicism for the first time!

As a cradle Catholic (someone who has been baptized as Catholic as an infant and still practices the faith), I was surprised that many did not realize how beautiful and colorful are the vestments of the Catholic church.

To use a fashion vernacular, wardrobe changes are part and parcel of the Catholic liturgical calendar when it comes to the robes that the clerics wear during the year. The General Instruction of the Roman Missal (GIRM) provides the norms for liturgical colors. 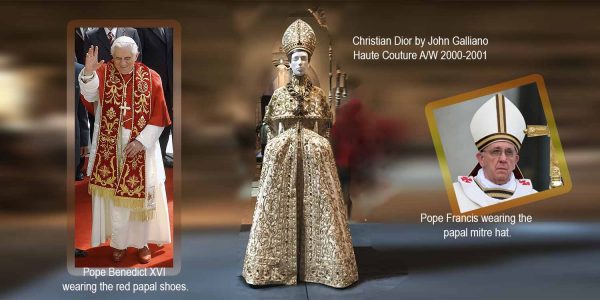 Yet, I would be remiss if I did not mention here that these vestments and their influence in fashion is just one of the many manifestations of the secular Catholic imagination. Noted sociologist and Roman Catholic priest Father Andrew Greeley explained it best in his book, “The Catholic Imagination

“Catholics live in an enchanted world: a world of statues and holy water, stained glass and votive candles, saints and religious medals, rosary beads and holy pictures. But these Catholic paraphernalia are merely hints of a deeper and more pervasive religious sensibility that inclines Catholics to see the Holy lurking in creation. The world of the Catholic is haunted by a sense that the objects, events, and persons of daily life are revelations of Grace.” He calls this the “Catholic imagination.”

And like Father Greely’s book that some called “blasphemous,” the same are said about the exhibit “Heavenly Bodies.” Yet, as a Catholic, I see it as a good sign. Because there is dialogue. After all, for me, that is what Catholicism is all about. Every mass celebration is a dialogue and communion with God.

HEAVENLY BODIES: Fashion and the Catholic Imagination
May 10 – October 8, 2018
At The Met Fifth Avenue and The Met Cloisters
Sunday–Thursday: 10 am–5:30 pm
Friday and Saturday: 10 am–9 pm

If you cannot see the exhibit, there is an accompanying catalogue available at Amazon.com. But, I do not recommend it. I bought one at The Met while I was still high on the exhibit then was totally disappointed when I was reading it because the photos were not photos but rather a collage of scans of the garments. Thus, it did not represent what I saw in the exhibit.

Still, if you want a copy, here is the link: Heavenly Bodies: Fashion and the Catholic Imagination