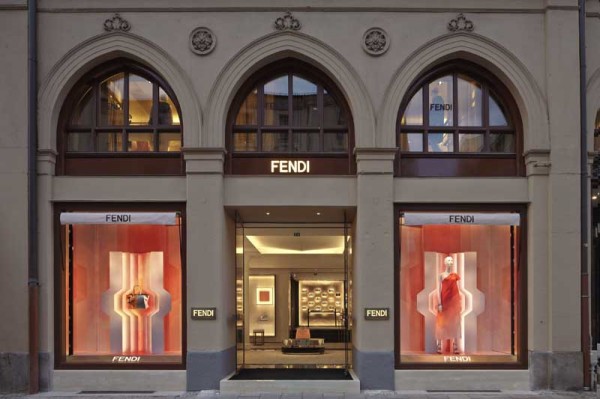 On Tuesday, March 18th, 2014, the luxury label FENDI, whose Creative Director is Karl Lagerfeld, opened its first boutique in Germany. The boutique is 365 square meters large and is located in Maximilianstraße 12-14 in a historical building from the 19th century. The hosts, Pietro Beccari (Chairman and CEO of FENDI), Karl Lagerfeld and Silvia Venturini Fendi personally welcomed the guests at the opening.

Womenswear, handbags, shoes, accessories, furs and watches will be offered on two floors in the new boutique. In addition, there will be a made-to-order corner as well as a VIP room for individual fittings.

On the occasion of the FENDI boutique opening, FENDI has created a limited version of the Bag Bug “Funich”, which will be sold in a limited edition of 50 pieces. Furthermore, the unique Baguette Bag, designed by the Japanese artist Hiroshi Senju will be displayed in the boutique.

On the same night as the boutique opening, the exhibition “The Glory of Water” will be shown in an exclusive setting in the “Haus der Kunst” in Munich.

This exhibition includes fascinating images of the fountains of Rome, captured by Karl Lagerfeld, a restored version of the fashion-movie “Histore D’Eau” produced by Fendi in 1977 and a corresponding coffee-table book, published by Steidl publishing house.