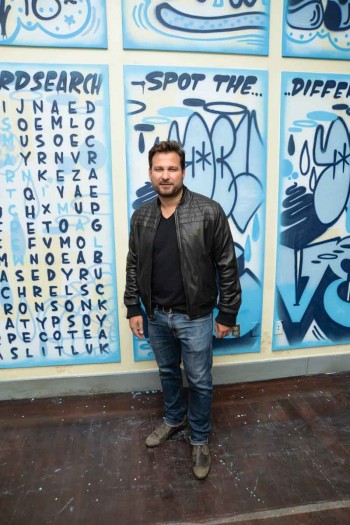 Originally called 60 Thompson Hotel, it was renamed SIXTY Soho in 2013 and became the flagship of the newly founded SIXTY Hotels Collective.

Recognized a trailblazer in the boutique hotel world since its inception in 2001, the name change to SIXTY Soho strengthened and underscored the hotel’s reputation as THE PLACE where savvy New Yorkers and international travelers liaison in style.

So, when SIXTY Hotels founder of Jason Pomeranc slated SIXTY Soho for renovation, he did not silently shutter the hotel for the expected four months of construction and retrofit. He held a very unusual art exhibit with New York’s party set as guests.

On May 14, 2014, Jack Pomeranc invited Smart Crew, an artist collective started in 1997 to write graffiti and create an interactive space in the hotel’s second floor that allowed partygoers to participate in the beginning of SIXTY SoHo reimagining.

And since graffiti is not meant to last forever, as the party ended Jack Pomeranc himself picked up a sledgehammer and began deconstructing the exhibit which in turn marked the reconstruction of SIXTY Soho.