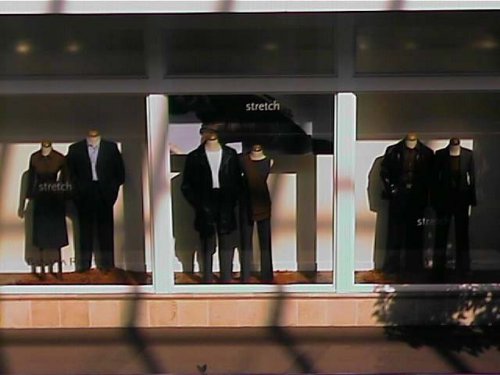 DALLAS, Jan 9, 2014/ — #TBT is short for Throwback Thursday, which basically means something from “a while ago”. In this case, that something is photos of store windows. Why it is Throwback Thursday and not Throwback Tuesday, I don’t know. But I know that Tuesday is “Transformation Tuesday.”

And just to round out the rest of the week – Monday is “Man Crush Monday”, Wednesday is Woman Crush Wednesday, Friday is Flashback Friday, Sunday is Selfie Sunday. I don’t know what is for Saturday.

Whew! Glad that explanation is out of the way! Back to store windows which are true throw backs because they all go back to November 1999. It’s pre-Y2K! Do you even remember what Y2K means? It’s Year 2000, the beginning of a new millennium.

The only thing that was different was the Corgi display for the pet store, which of course made sense since headless forms seem inappropriate at dog owners.